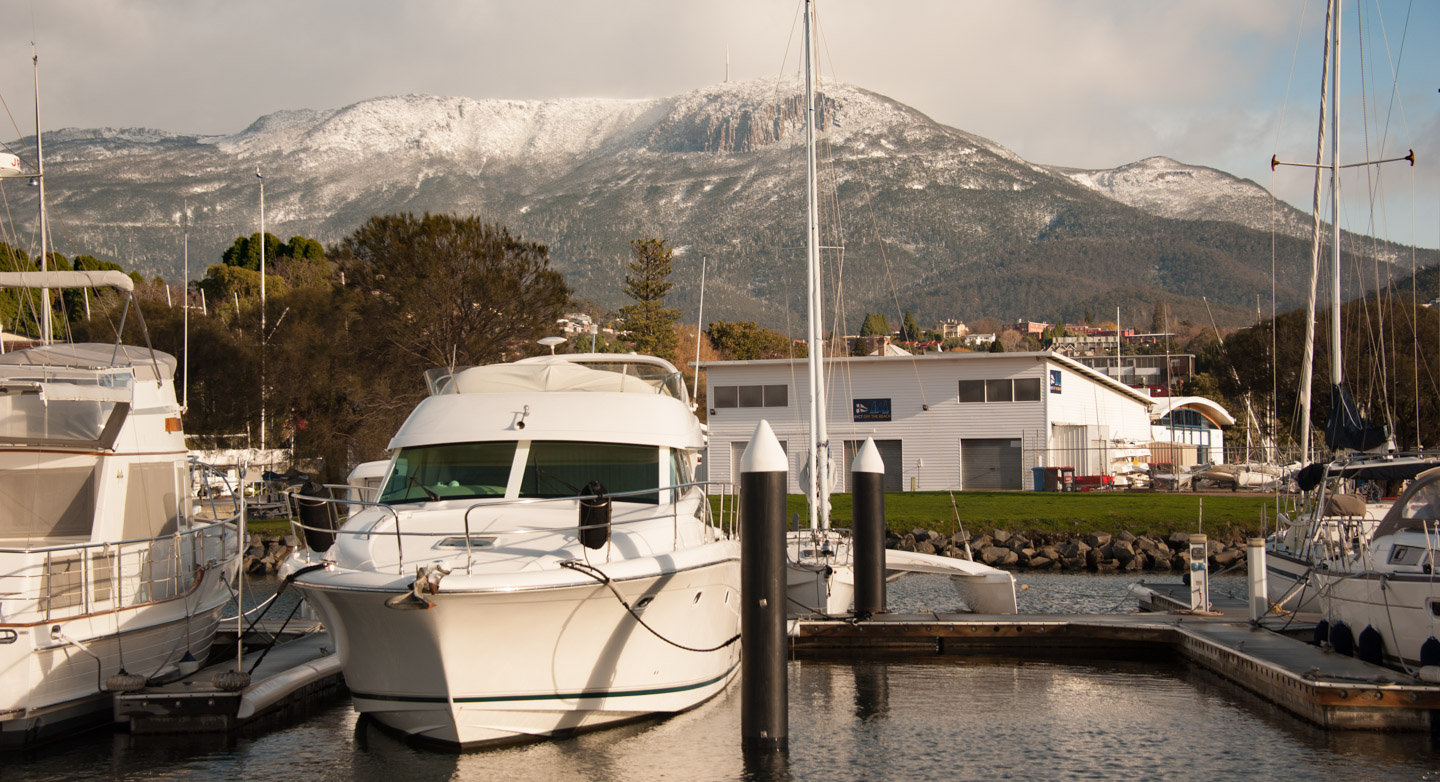 Walking to the clubhouse I fall in with another sailor, a local it turns out. I'm rugged up in several layers finished off with a beany, woollen gloves and padded jacket. He's wearing a pair of shorts and not a lot more. Before I can comment on his attire he breaks out with "Some people think I'm crazy wearing shorts in this weather". I aver that I did have second thoughts about speaking with him. "Yeah," he says taking this in good humor, "I always wear shorts". And that's it. He always wears shorts and that's sufficient justification for freezing his cods off in the middle of a Hobart winter.

Along the Queensland coast are innumerable islands, many of which provide more or less safe anchorages on their north-western sides. But beware the cruising yacht that coasts into a beautiful calm bay after flying down wind all day in the South East trades, leaves their dinghy tied to the stern of the boat, and retires for the night thinking there is nothing more certain than a quiet night. Such dreamers are likely to be awakened during the night by a low wailing, gradually rising to a high screaming, before breaking forth with incredible fury into a blast so loud, long and strong that the entire boat shivers and shakes from end to end, before descending again into quietness a few seconds later. Next morning, if you still have a dinghy, it will be upside down. If you were casual in anchoring then you will no longer be in the same place. These 'bullets', as they are called, are winds that come over the top of the islands periodically. You might get one every few minutes, or just one in a night. The same thing happens in Hobart with Mt Wellington. When the wind blows from the West it comes over the top of the mountain. Mostly, the marina at Sandy Bay is protected and calm. But every so often a bullet comes screaming down the mountain and threatens to blow the entire marina — pontoons, yachts and all — out into the river, and then it is calm again.

The mountain, Mt Wellington, is awesome. Sometimes, it sits above Hobart with a heavy, dark weight, bearing down on the city, pinning it to the shores of the Derwent River with its relentless mass. Other times, a wreath of clouds lifts it from the ordinary world of the city below and raises it into the air to float over the town like some magical, unattainable kingdom. In this morning's dawn sunshine, to my delight, the mountain sparkled with snow! Its naked glory revealed, modesty quickly prevailed and flowing clouds spread over it, cloaking it again in grey invisibility.

Looking at that photo of the mountain, you would not think that you are in the heart of the city, just 3km or so from the CBD. Hobart hugs the shore of the river on both sides. The Derwent River is wide and deep and there are only two bridges in the city itself. The very first, the Hobart Bridge, was built in 1943 and was a unique floating bridge with an opening section (you can read about it here: http://www.visithobartaustralia.com.au/floating-bridge.html). It has since been replaced with a conventional steel and concrete specimen. In 1964 a second bridge, The Tasman Bridge, was opened closer to the city center. In 1977 a cargo ship took out one of its pylons killing many people and sinking the cargo ship, which is still at the bottom of the Derwent. With Hobart again divided by the river it was boom times for ferry operators again.

It's been a very windy night. I slept OK but about 5AM I noticed the noise of the boat change. It's hard to describe, but one gets used to the noises a boat makes and this change was enough to rouse me. At first I think it's just a change in wind direction but I check the lines thru the saloon windows anyway. That's odd, why can't I see the aft line? Maybe the light, it is dark and hard to see. So I put some clothes on, get a torch and go outside in the gale and it's obvious that the aft line has gone and the boat is sitting at quite an angle off the pontoon with all the strain being taken by the aft spring, which is righteously complaining. The remains of the aft line are hanging in the water from the stern cleat — 20mm line worn thru from chafe at the splice. I go to the bow to get off as the boat is hanging a couple of metres from the pontoon. Good thing the pen next to me is empty or I would be banging up against the boat next door. With a new line fixed I go below, make coffee, listen to the wind, and contemplate boat noises.

At about 7:30 I walk to the clubhouse. The wind is creating lots of work for marine trimmers with torn clears and covers everywhere. It is now blowing 30 knots with gusts to about 60 (about 100kph) and it is hard just to walk the pontoon. I am definitely at the 'windy end' of the marina. In front of me there's a fetch of maybe 50m to the shore and no apparent reason why I should be copping it.

I meet Karl, one of the club bosuns, doing his morning rounds and he says it's the worst weather they have had this year. Karl is a powerful looking guy and his expression is unsmiling and set. As a concession to the wind he is wearing a padded jacket, but it looks incongruous with the shorts. Why do the locals all wear shorts? He refurls a blown headsail on someone's boat and then gives me a hand to retie my boat. I must get new lines. In the light of day it's clear that all the lines are worn. Anyway, they are now all safely doubled with spare lines from the locker.

The wind hasn't stopped all day. At least here in the marina I can get off the boat and go for a walk, which I did this morning. But it's now mid-afternoon and I want everything to stop shrieking and to stop moving for a while. The fenders on the boat next door keep riding up over the pontoon. I keep going out and putting them back. I lowered one and it seems to have helped, so I will lower the other. There, that seems to have done it. It is bizzare weather. The sun has been shining all day. At the same time, it's been raining most of the day too. There's a rainbow to the south that has been there several hours, but no pot of gold. Mind you it is arching right over the casino so maybe it is someone's lucky day, or more likely another lucky day for the casino owner.

The snow is gone from Mt Wellington, it is sunny, and the wind has dropped to a breeze. A heavenly dawn replaces yesterdays weather from hell.